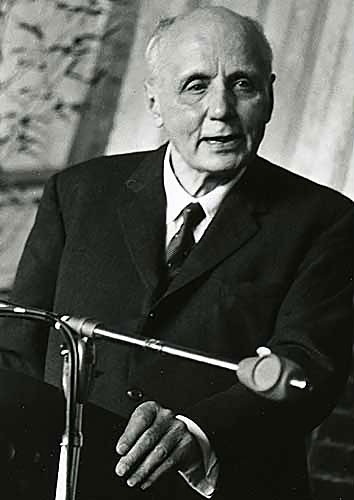 Kurt Hahn was a key figure in the development of experiential education. He was the founder of the the Atlantic College, the first United World College, the Duke of Edinburgh’s Award, Gordonstoun, Outward Bound, and Salem. Many other institutions, such as the Atlantic Challenge, the Kurt Hahn Trust, and Round Square, were initiated by others who were inspired by his ideas. KurtHahn.org was founded in 1999 by Charles Costello and Liz Cunningham – with the generous assistance of the Kurt Hahn Archive and numerous staff from Hahn-inspired schools – to provide access to Hahn’s speeches and writings about him.
Kurt Hahn was born June 5th, 1886 and died December 14th, 1974. “There is more in you than you think” is an inscription found on the wall of a family home in Belgium before World War II. It became one of the leitmotivs of his philosophy: that each of us has more courage, strength and compassion than we would ever have fathomed. Kurt Hahn’s calling in life was to help people realize this truth about themselves. We hope you find similar inspiration here.